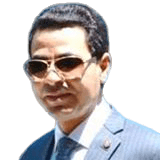 Prof. Mahmoud Abdel-Aty completed his doctorate in quantum optics at Max-Plank Institute of Quantum Optics, Munch, Germany in 1999. After his analytical study of quantum phenomena in Flensburg University, Germany, 2001-2003, as a post doctorate visitor, he joined the Quantum Information Group in Egypt. He received the D. Sc. (Doctor of Science), in 2007.

He is especially well known for seminal contributions to theories of quantum measurement, nanomechanical modeling, highly non-classical light, practical information security, and optical implementations of quantum information tasks. His current research interests include quantum resources, optical and atomic implementations of quantum information tasks and protocols. He is the Editor-in-Chief of Applied Mathematics & Information Sciences (an International Journal, USA), an editorial board member for several international journals.

He has published more than 190 papers in international refereed journals, 5 book chapters and 2 books. He is the Editor-in-Chief of an International Journal “Applied Mathematics & Information Sciences, USA and Editor of more than 20 International journals. Prof. Abdel-Aty is acting as a president and founder of Natural Sciences Publishing USA.

Abdel-Aty’s research has been widely recognized and he has received several local and international awards. He obtained the Amin Lotfy Award in Mathematics in 2003, the Mathematics State Award for Encouragement in 2003, the Shoman Award for Arab Physicists in 2005, the Third World Academy of Sciences Award in Physics in 2005, Fayza Al-Khorafy award in 2006, the State Award for Excellence in Basic Science in 2009 etc.