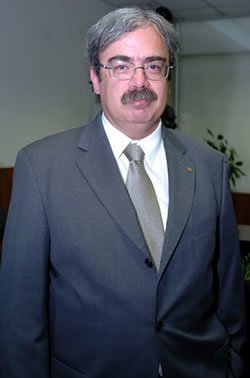 He got his doctoral degree in Mathematics from the National University of Mexico (UNAM) at 1983 and made a postdoctoral stay at Zürich from 1984 to 1986. Since then he has a research position at Instituto de Matemáticas of UNAM, institution he directed from 1998 to 2006. His areas of expertise are the representation theory of algebras and the spectral theory of graphs where he has published more than 120 papers in indexed journals with more than 2,000 citations. He has supervised 9 doctoral thesis, two of which won the best doctoral dissertation prize of the year given by the Mexican Academy of Sciences. He was President of the Mexican Mathematical Society (1988-1990), President of the Mexican Academy of Sciences (2002-2004), President of the Mathematical Union of Latin America and the Caribbean (2001-2008). From 2006 to 2010 he was Deputy Director General for Science of the National Council for Science and Technology of Mexico. He was General Director of Centro de Investigación en Matemáticas en Guanajuato, México. Among other distinctions he received the TWAS Award in Mathematics (2002), the National Prize of Mexico in Science and Arts (2005), the Humboldt Prize (2006), the National University Award (2012), he is member of El Colegio Nacional since 2017 and became Doctor Honoris Causa from UNAM (2018).